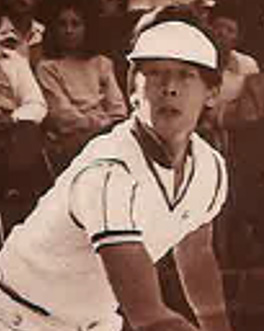 Prior to arriving in Hong Kong, King peaked at a career-high ATP No. 269 in singles in 1977 and No. 727 in doubles in 1984. He also competed in the men's doubles main draw at the US Open at Forest Hills in 1977. He won the US Men’s Singles Chinese National Championships in San Francisco Chinatown three times and the doubles title twice in the 1970s, and played tennis at the University of Southern California in 1969.

Moreover, in 1985, King not only captured the SCAA and CRC Open men's singles titles, he also teamed up with Tau Luu to win the men's doubles at all three local majors – Hong Kong Closed Hardcourt Championships (now Hong Kong National Tennis Championships), SCAA Open, and CRC Open. His four career men's singles titles at the CRC Open puts him in equal 4th all-time behind only Ip Koon Hung with 11, Tau Luu with 8, and To Kwun Kau with 5. King is tied with Michael Walker and Wayne Wong with 4 each.

At the Hong Kong Closed Hardcourt Championships, King won the men's singles title in 1981 and captured the men's doubles six consecutive times from 1980-85.

From 1984-86, King represented Hong Kong in five Davis Cup ties, going 0-2 in singles and 3-2 in doubles. In 1984, he teamed up with Kelvin Ng to win the crucial doubles against Chinese Taipei in what turned out to be Hong Kong's maiden Davis Cup tie victory. In the ensuing quarterfinals, King played No. 1 singles and doubles with Kelvin Ng against Thailand. He then won crucial doubles rubbers that contributed to eventual victories for Hong Kong, joining forces again with Kelvin Ng against Singapore in 1985 and together with Mark Bailey in a five-set win against Malaysia in 1986.

King also served as an HKTA Councillor from 1985-87 and is a member of the International Lawn Tennis Club (IC) of Hong Kong. He was the official Welcoming Dinner's Master of Ceremonies when IC of Hong Kong hosted the Asia/Oceania IC Rod Laver Junior Challenge for the first time in 2019.